THE Harrogate Society of Magicians was founded in 1947, largely through the efforts of three people: Wilfred S Hartley (its first Secretary) and current (and founder-) members, George Fowler and Brian Knowles. Ten members attended the inaugural meeting in November 1947, at which J T Wilkes was elected President.

Meetings were originally held in members’ homes but, as numbers grew, sessions moved to a local hotel and, within a year, the society was able to hold its first “Evening of Magic”, in aid of the Royal National Lifeboat Association, at Harrogate Grammar School.

Back in 1947, when 16-year-old George Fowler met his friend Brian Knowles (too young to join an existing club), and persuaded an older local man, Wilfred Hartley – who loved magic – to help found a society, they could hardly have imagined the ups and downs the organisation would face over the years, nor, perhaps, having at times left the area to pursue their careers, that they would one day help celebrate its sixtieth birthday. 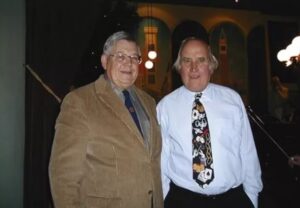 That celebration took place in December 2007, with members, their families and friends enjoying an evening of food, magic and other entertainment at Pinocchio’s restaurant, Harrogate.   A building that had seen many changes over the years, it was, between 1910 and 1931, the Empire Theatre, home to a variety of acts, including such notables as Sarah Bernhardt and Fats Waller. Our celebration itself took place on the former stage.

Several Presidents,  past and present, were able to join us, including George Fowler and Brian Knowles (who, even today, remain as enthusiastic as ever), while Paul Daniels sent us a goodwill message. 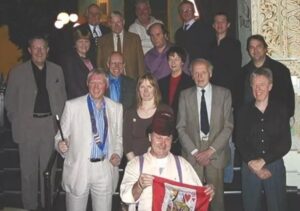 Both George and Brian’s individual contributions over the years (George remains our long-standing and hard-working Secretary) have been recognised by the award of well-deserved Life Memberships.

The society is a healthy mix of amateurs, full-time professionals, writers, lecturers and inventors.   Several combine their membership of Harrogate with that of other societies in the Yorkshire area, notably Leeds, Bradford and York.   We hold an annual dinner, run internal competitions, play host to fellow-societies, visit others and put on public shows, raising money both for ourselves and other good causes.

In 2011 the Society published a detailed History of the Harrogate Society of Magicians 1947-2010, a copy of which is lodged in the Magic Circle library in London.